THE DORSET DESTROYERS Dorset’s 1st and only Wheelchair Rugby Club start with a Bang! #1

They started on the day with just 8 wheelchairs and having to use 9 day chairs due to the massive interest in the Club and Wheelchair Rugby.

“So, how did that work?” We asked the Chairman/Mechanic and Player Nick Coombs

“Well, we all wanted to play so desperately, that we shared the wheelchairs and we trained, very carefully with our day chairs.”

He continued “The response to our Club and the Sport has been phenomenal. No one imagined this response. We knew it was going to be big, but this has blown us all away”

“So, what about the future?” The committee members, Sue, John, Paul and Phil all smile and you know there is something big in the pipeline.

Sue, the Club Secretary and Trainee Referee chips in “We are proud to announce that we are playing our very 1st Friendly on March 15th against our local rivals The Solent Sharks in Southampton. It will be an epic clash. Hants vs Dorset, and the very 1st time that these 2 counties will have played in the Sport” 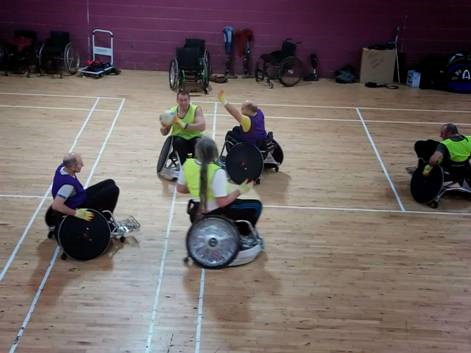 I asked Sue:- “Is there much rivalry?”

“ No. To be honest we are so grateful to The Sharks for giving us this opportunity in the middle of the Season and they have helped us enormously. Wheelchair Rugby Clubs are more like a Family, we’ve been helped so much by The Sharks and so many other Clubs.”

Paul chips in:- “We may be a new club, but we’re not taking this Friendly lightly. It will be a chance for us to learn and we are the underdogs so the pressure is not on us, but the Sharks” he continued “There may be a bit of giant killing, who knows??”

Thank you and the best of luck to all The Dorset Destroyers and The Solent Sharks, a Club that started in 2013 and has some prestigious players including Aaron Phipps and Myles Pearson who both played in London Paralympics 2012.

STOP PRESS THE DORSET DESTROYERS RECEIVED £1,000 ANONYMOUS DONATION AND ARE DONATED ENOUGH MONEY TO BUY 3 NEW WHEELCHAIRS BY THE BC CLUB

Thank You to The Doreset Destroyers and Nicholas Coombs for choosing RMA Sport Rugby Wheelchairs!